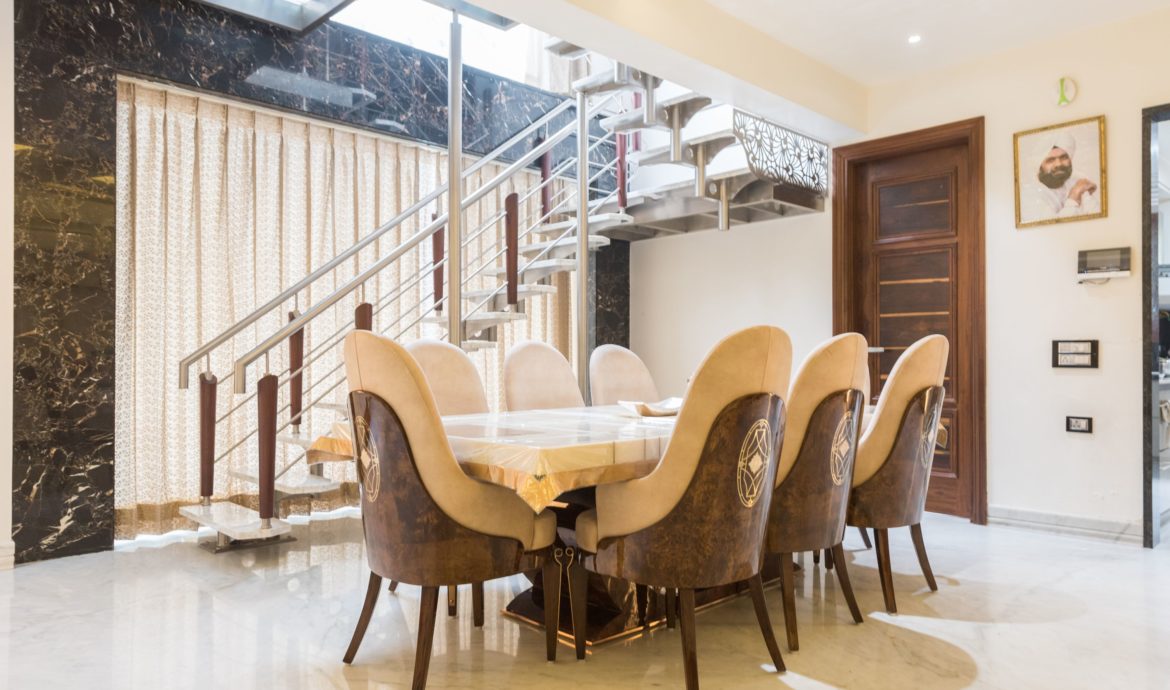 Luxury and the Hues

Every home tells a story but some homes define their persona, The Veer Cottage by Ar. Kapil Mehta is one such exception with a culmination of luxury and the hues.

With an extensive experience of more than two decades, Ar. Kapil Mehta has managed to reach the zenith in the design fraternity. Born and brought up in a household pertaining to Business of Publications that also included Architecture and Civil Publications, his house was frequently visited by authors from the industry. Having consistently been under the
influence of learned men it inspired him to pursue the profession of designing spaces. In the hindsight of travelling the world, he also kept an open mind to study the nuances and Nitty-gritties of architecture.

Adding another feather into the cap Ar. Kapil Mehta brings out an exquisite delineation in the form of a resplendent residential design – The Veer Cottage. Rolling over a span of 6800sq.ft, this five-bedroom duplex is a true amalgamation of class and ornamentation. With the notion of outlining an ethereal space, the overall schema was kept subtle while incorporating outlandish design elements to grant the space a distinctive sense of style.
Speaking on the same, Ar. Kapil Mehta mentions, “The client desired to amplify the sumptuousness of this house that rendered a boundless appeal through constructing a duplex. The client insisted on curating a space that included the wholesome of floor area while conferring onto a barrier-free domain. Since the longer side of the plot was north-facing, maximum of glass was used in the façade to assure a glare-free natural light inside the house.”

The painstakingly done façade with Brazilian and Indian stones in tints of grey, glass and stainless steel jaali work manifests as a masterful spectacle. The main gate envisaged in teak wood finished in HPL on the boundary wall encompasses very interesting details where CNC router cut steel member highlights a silhouette of a tree. A separate entry door provided for an obstruction-free access also incorporates a similar silhouette forged in CNC router cut wood complementing the facade. A homogeneous leaf-like pattern is etched on the lighting elements provided on the sides of this door. These small engaging details subsumed in the design untangle the saying, “luxury is in each detail”.

The notion was to design this place to its true potential, conceptualising every aspect keeping in mind the client’s brief. This meticulously designed abode was split into one master bedroom, two standard bedrooms and two bedrooms meant for the kids. Entering into this sumptuous expanse through the stilt level where on the right sprawls the parking, one reaches the lift and staircase area in the front to access the diligently outlined residential dwellings. A momentous entrance foyer is created adjacent to the lift in order to entertain the business guests.

Moving upstairs, one enters the dining cum lobby area encompassing an eloquent yet extraordinary spirit. The chic furniture configurations including Italian pure leather sofa from TURI and wooden dining table made of teak wood and brass elements here grant the expanse a contemporary sophistication. A fascinating feature wall replicating a TV unit has been bestowed with lit shelves that kindle the unique décor elements kept in there. A twin ceiling concept culminating an elegantly outlined hash sign boast off an eclectic design arrangement in the dining and the formal living area behind, respectively. The ceiling provides a rational segregation to both the areas. The tranquil yet glistening scheme incorporated in the living area paints a picture of order and uniformity. The seating in the living room is more on the minimal lines with an influx of subtle modernity. An urbane wall curated with soft panels serves as a focal facet of this sphere while highlighting the finesse of Mahatma Buddha. The wainscoting done here accentuates the tellurian interiors. The kitchen is pragmatically designed in the south-east direction next to the main entry in order to avoid pests and enjoy the morning sun. Articulated to illustrate a masterful spectacle, the staircase fabricated in stainless steel with stone treads was planned for better communication and ease of kids.

Meandering with the flow of the layout, one reaches the first floor to step onto this mesmerising digital flooring conferring onto an epitome of “cybertecture, the hints of which are also visible from the ground floor which serves as a showstopper. The massive full-height window with digitally printed glass is assembled in such a way that one can see a play of shadow dancing on the purple flooring imparting great impressions for the kids to savour the uniqueness of the space. The blue chesterfield armchairs laid out perfectly complements the purple flooring.

The master bedroom constitutes straight lines and glistening gold accents highlighted through the cupboard and chic ceiling design. The headrest and side table designed as one, marks for an exclusive look. Captivating the attention of the inhabitants, the overall bedroom style grants a serene spirit. The initiative to comply with the client’s needs was taken a notch further while designing the other bedrooms. Kids rooms were kept on northeast side encompassing a corner window allowing in natural light and morning sun inviting a rejuvenating vibe.

This house while staying true to its nature unfolds an experiential design for a mango man with a plush taste while adding in numerous opulent details and elements, thus portraying an architectural marvel.